Material based collections of decay patterns are available for:

Efflorescences are whitish, powdery or whisker-like crystals on the surface of porous materials. In most cases efflorescences are poorly cohesive and in general they are constituted by soluble salt crystals.

Whiskers: a few microns thick to centimeters long, columnar, often curved crystals. Under specific conditions, crystals, which do not typically exhibit needle-building habits, grow as fine, hair-like shapes, the so-called whiskers. Whiskers have been observed developing from a variety of substances, e.g., metals, salts, etc. Their diameters range between 0.01 and 100 microns, while their length can reach up to a few centimeters. They grow preferentially in the longitudinal direction, while the growth on the lateral crystal plane is either suppressed or, to some extent, still in progress. Some whiskers accommodate a single, or a few, screw dislocations along their axis, causing a spiral growth at the tip, so that material along the lateral plane has to be transported to the tip. Some whiskers do not have screw dislocations, where the preferred growth takes place at the top- caused by a different mechanism. Finally, there are whiskers that do not grow at the top, but at their base, pushing the growing crystal upwards. 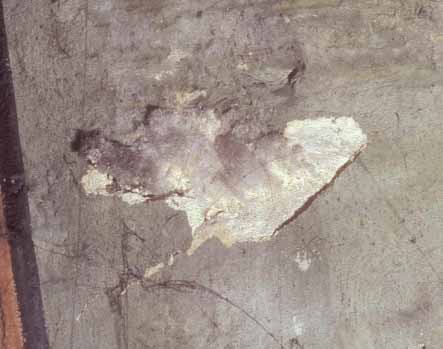 Efflorescence made of KNO3, the crystals are whiskers

Salt crystals on a masonry joint; the individual crystals are whiskers

Powdery efflorescence: white, mealy, loose to dense or fluffy coating. Powdery efflorescence will develop differently depending on the type of salt crystallizing. Some salts, especially the less soluble ones such as gypsum, can bloom in this very fine form as soon as they crystallize. However, in the case of sodium sulfate this form of efflorescence results from the dehydration of the originally hydrated salt.

Salt-induced pustules on a wall painting

Salt crust : crusts can be formed by soluble salts when they are highly concentrated developing salt aggregates with planar cohesion and very variable thicknesses (a few microns to mm)

Halite crust on an exterior wall in Strahlsund

White loose crust (sugary crust): consists of individuals that are visible to the naked eye or low magnification as glass-clear crystals. Sugary crusts usually form in a moisture film. However, they can crystallize from a salt efflorescence that takes up water from the surrounding air, undergoing dissolution and followed by recrystallizing as the environment dries. 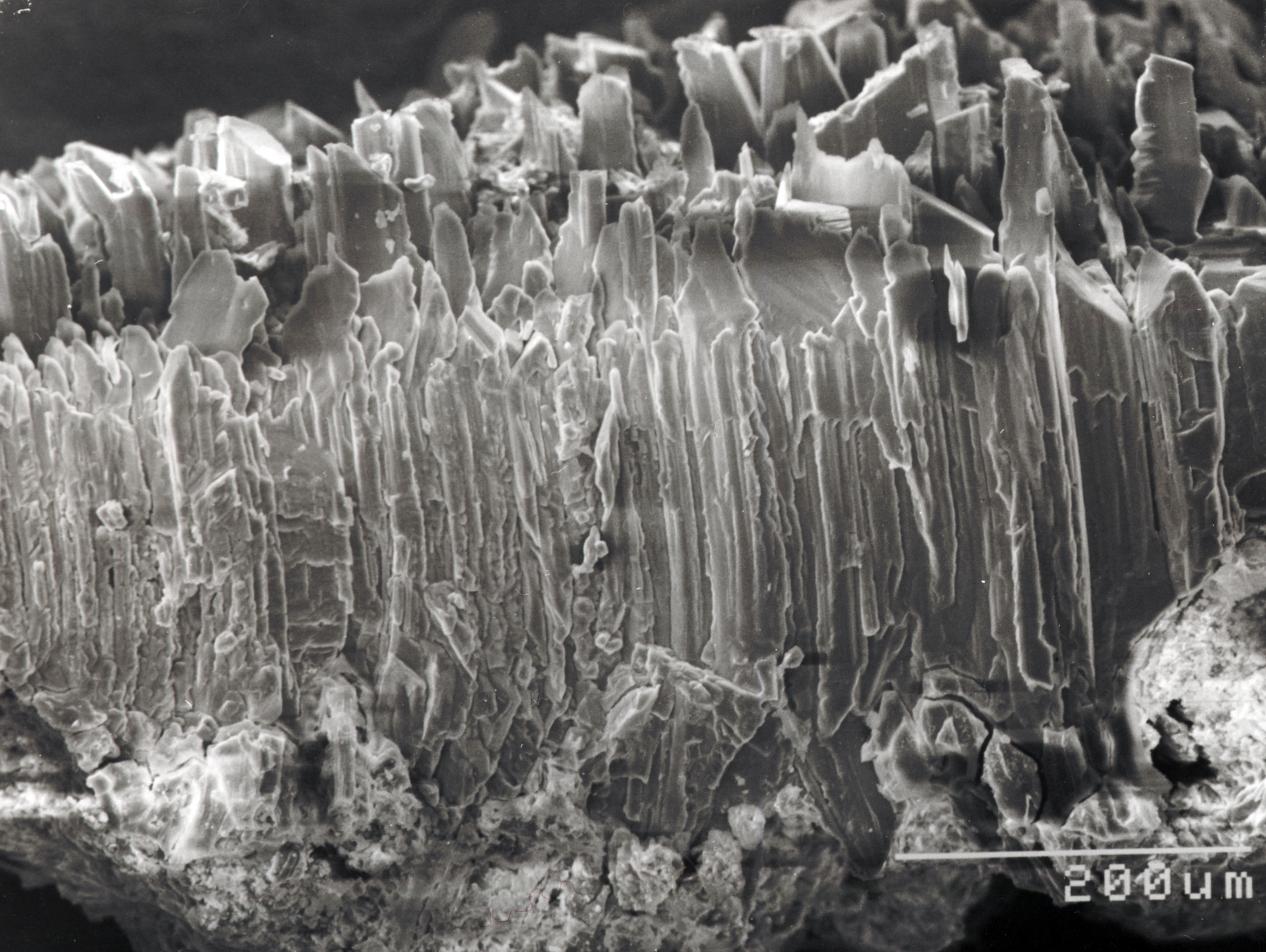 Framboidal or botroidal crusts: crust of white, spherical aggregates- its surface resembles that of a raspberry or blackberry or even a cauliflower. Botroidal crusts occur preferentially along small defects (e.g., cracks) on an otherwise relatively dense plaster surface. They also can form as separate units on dense stones.

The habit of salts will change depending on the conditions during their formation.

Due to the crystal structure and the typical mineral and surface combinations, salts change in their physical appearance. On occasions, changes can also be caused by unilateral growth. We describe these mineral forms as follows:

Formation of salt crystals, according to Arnold

the crystal morphology (habit) can be subdivided into five groups depending on the moisture condition present (see figure):

a) Multidirectional growth, large crystals with equilibrium shapes are formed on a wet surface as long as the growing crystals are immersed in the solution. The solution covers the whole surface or parts of it as a dense film.

b) A granular crust of isometric crystals forms on a wet substrate, while the crystals are immersed in the solution film and are growing into multiple directions.

c) A fibrous crust forms on a medium moist substrate that is completely covered by the solution film. The columnar crystals grow from their base that is still in contact with the nutrient solution so that the dry crystals are moved upward.

d) Columnar, thick whisker-like crystals grow on the humid surface and out of small pools of the solution.

e) Very thin whiskers grow out of "solution drops" on the now nearly dry surface. The result is a fluffy salt efflorescence.