Information on the origins and formation of natrite on monuments

Sodium carbonate can crystallize within the porous building materials when soluble sodium compounds in an alkaline environment, as explained below, react with the CO2 from the air leading to its eventual efflorescence.

Cements containing up to 0.5% soluble alkalis (in accordance with DIN standards) have a high content of sodium ions. It can be calculated that 1g of Na2O can lead to the formation of 4.6g of sodium carbonate decahydrate. If, for example, a Portland cement only contains 0.1% Na2O then 0.45kg of sodium carbonate can be formed per100kg of cement [Arnold.etal:1991]Title: Monitoring Wall Paintings Affected by soluble Salts
Author: Arnold, Andreas; Zehnder, Konrad

. A large number of cleaning materials and, in particular, previously used conservation products (such as waterglass) contain sodium ions that remain in the building materials. Further sources are ground and surface water which may contain Na+-ions. Deicing salts may contain sodium chloride, which is very soluble. This salt is naturally present in coastal areas because of the seawater and NaCl may be found suspended in the fog and sea spray.

Natron, sodium carbonate decahydrate, is most commonly found as efflorescences on building materials. It can also crystallize as thermonatrite, the monohydrate, but it is unlikely to find the anhydrous salt, natrite, usually referred to as washing soda or soda ash. These salt(s) are very water soluble which and hence have high mobility within the porous network of the building material. Temperature has a pronounced influence on the solubility behavior of thermonatrite (the monohydrate) and natrite (the anhydrous form) in water. As a consequence, lowering of the temperature may result in the supersaturation of their water solutions with the subsequent precipitation of these salts, even though the water content remains the same. It also can form a metastable heptahydrate.

Diagram 1 – Illustration of temperature controlled solubility changes in thermonatrite and natrite in comparison with other salt phases (solubility data, Schwarz and Stark/Stürmer 1993).

It is difficult to evaluate the hygroscopicity of sodium carbonates found in situ as the sorption and saturation points are influenced by local conditions, such as presence of other ions and temperature levels which will influence the hydration degree, and therefore can vary considerably.

The compound Na2CO3 and H2O:

Natrite and thermonatrite are considered as damaging to masonry due to their frequent changes in crystal structure and varying water of crystallization content. This occurs as a result of the low hydration/phase transition temperatures of around 35°C illustrated above. The change from thermonatrite to natrite and resultant addition of 9 water molecules into the crystal lattice involves a volume increase of around 260%. The transition from thermonatrite to sodium carbonate heptahydrate (at a temperature of 0-20°C and an RH of approx. 80%) results in a build up of hydration pressure in the region of 28.4 –63.7 N/mm2 [Stark.etal:1996]Title: Bauschädliche Salze
Author: Stark, Jochen; Stürmer, Sylvia

Initial identification of thermonatrite and natron can be carried out in situ with the aid of simple solubility tests and pH-measurements: According to Bläuer-Böhm, natron is the only currently known efflorescent salt to have an alkaline pH-value well above 8 but which also displays the ability to deliquesce in its own water of crystallization when heated slightly. Similarly, thermonatrite found in situ also has an alkaline pH-value and is soluble in water. However, thermonatrite is not soluble in water-free ethanol.


The solubility in water and insolubility in ethanol can be confirmed through microscopic examination. Both thermonatrite and natron
have a clear tendency to form needle and/or dendritic crystal shapes during re-crystallization. If gypsum is present in the sample material, a rapid precipitation of calcium carbonate will occur which is visible as a whitish deposit.


Under the polarizing microscope:


The number of crystallization water molecules of the sampled crystals will vary following changes in ambient relative humidity and temperature levels. After only a short time exposed to dry air (with approx. 60% RH) thermonatrite will be found predominantly.
The determination of the refractive index is carried out according to the immersion method. Individual particles soaked in standard immersion oil with a refractive index of nD = 1.518 display a strong change in relief during rotation under transmitted polarized light [Blaeuer-Boehm:1994]Title: Salzuntersuchungen an Baudenkmälern
Author: Bläuer-Böhm, Christine

, a.a.O., p. 86. Due to the high birefringence, thermonatrite crystals display bright interference colors. This clearly differentiates it from natron which has a noticeably smaller maximal birefringence.
Thermonatrite belongs to the orthorhombic crystal system. Associated with this is the parallel and/or symmetric extinction when viewed under crossed polars. Larger crystal needles generally appear completely extinguished and the extinction occurs suddenly.

Differentiation of thermonatrite from similar salts:


Thermonatrite is clearly identifiable when the following criteria are known: 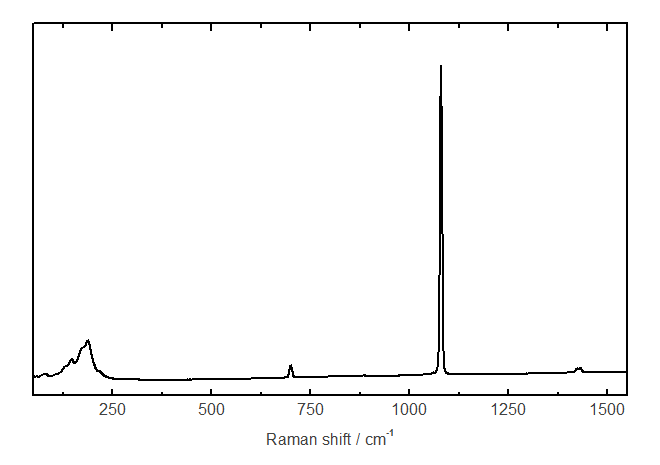 Through the Scanning Electron Microscope