The analysis of salts can be carried out by micro-chemical testing on very small amounts of sample(s). The analysis consists in the qualitative detection of single ions in more or less concentrated salt solutions. The reaction products are either visible to the naked eye (formation of a precipitate or color change of the solution) or through a microscope where the specific crystal shapes can be identified using a magnification of about 100 times.

The first step of every material analysis is sampling. In this procedure, the samples to be analyzed are pure salt efflorescence. These can be either fluffy or form a crust on the surface of the material. 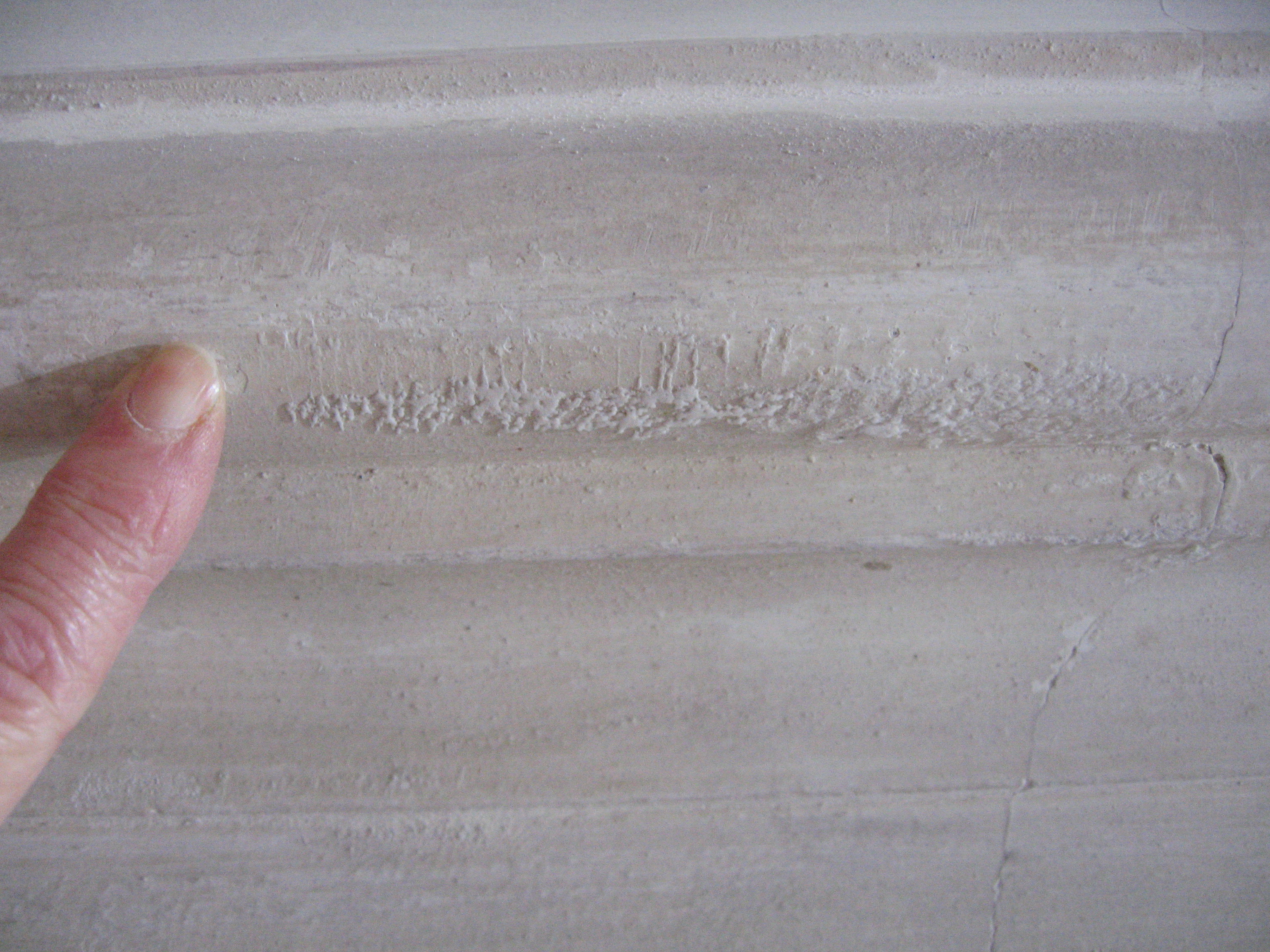 It is therefore important to make sure that the samples only contain the salt efflorescence and that particles or grains of the substrate were not included during the sampling. Adequate sampling procedures are critical as otherwise the test results will be distorted.

The samples should be analyzed as soon as possible. If the samples have to be kept for a time before they are analyzed, they should be kept in a refrigerator.

In principle there are three types of salt samples that can be analysed micro-chemically with the methods described here:

The testing methods are the same for the tree types of samples with only minor differences, but the interpretation of the results varies. The procedure is based on the detection of ions in a water extraction. Therefore, it is a prerequisite for the analysis that the ions be in solution. However, during dissolution of the sample chemical reactions may take place that will falsify the analytical results.

Microscope with transmitted or reflected light with magnification of about 100-fold. Some of the chemical reactions may release corrosive gases that can attack the metallic parts of the objectives. To somewhat protect these, they can be covered with a thin layer of Vaseline or other vacuum grease. This protective layer needs to be renewed regularly. Under no circumstances should a precious polarized light microscope be used to investigate the reaction products of micro-chemical reactions.

The required reagent solutions and chemicals for comparison are listed in the following tables.

Note: All chemicals used need to be pure p.A . grade

When working with chemicals safety precautions have to be taken. For example, no smoking, eating or drinking should be allowed in the laboratory or certainly not during the testing. It is advised to wear protective clothes, such as a lab coat and goggles. As gases may be released during some of the tests, the work should be carried out under appropriate ventilation, if possible in a fume hood. Hands should be washed before start of the testing, and at any point in which an interruption may occur. When leaving the laboratory, the lab coat and goggles should be removed and hands washed again. Upon resuming work in the laboratory, the same initial procedures should be taken, i.e., protective clothing donned, hands washed.

Used pipettes, glass rods, object slides, scalpels, etc. need to be thoroughly washed or cleaned before every test and before dipping them into reagent solutions. If necessary, they have to be replaced with clean new ones.

Each test described here has to be carried out on a separate test drop or salt grain.

movie:Dissolving the sample on an object slide

If an insoluble residue is observed this has to be removed by filtration as described below. One part of the sample should always remain untouched to perform tests that have to be executed on non-dissolved material (tests for ammonia, carbonates and hydrogencarbonates).

Micro-chemical test for the following ions are described in detail:

Dissolution of the sample

Some grains of the salt sample are put in the cavity of the glass slide and one or two drops of demineralized water added. The dissolution behavior of the sample is observed using a microscope. During this process, usually three possible situations can be observed

In the first case the micro-chemical testing can take place using the solution without further treatment. In the other two cases the solution must be separated from the insoluble parts by filtration.

It is worth going though the effort of making a good filtration, because the reaction products of the test reactions can hardly be detected in a milky or unclear solution.

For each micro chemical test place a drop of the solution onto a plain glass slide (without a cavity) using a glass rod.

The pH of the solution is tested by applying a drop with the glass rod onto an appropriate pH-paper strip.

Detailed test procedures are given for each individual ion. It is best to make each test on a fresh clean object slide, because this avoids all possible contamination by vapors emitted during tests performed on neighboring drops.

Interpretation of the results

When single salts are present the analysis is especially helpful to verify or complement the results of microscopic analysis. For example, the salt minerals Arcanite (K2SO4) and Aphthitalite (K3Na(SO4)2) can only be distinguished from one another microscopically using a microscope that allows conoscopy and the salt grains of the sample are big enough to allow producing a reasonable conoscopic image. Micro-chemically the two salts can however be distinguished quite easily.

It is not uncommon that different salt minerals are found present within a single efflorescence. When analyzing such mixtures it is important to be aware of the possible chemical reactions that can take place during the analytical procedure, especially during dissolution. In some cases the ions can react with one another to produce another salt than the ones present originally. Such reactions can occur within building materials [Arnold:1981]Title: Salzmineralien in Mauerwerken
Author: Arnold, Andreas

or they can happen only later during the micro-chemical testing procedure. In general, it is impossible to separate individual salt minerals for micro-chemical testing and salt mixtures have to be dissolved together. In particular, reactions that produce water insoluble residues need to be taken into account, because the precipitation reduces the amount of one or more ions present in the original salt mixture.

The problems encountered when analyzing such salt mixtures are described here for the case of mixtures of calcium sulfate and sodium carbonate.

Mixtures containing gypsum (CaSO4 • 2H2O) as well as natron (Na2CO3 • 10H2O) or thermonatrite (Na2CO3 • H2O) are frequently found on monuments. If such a mixture is dissolved in water, calcite (CaCO3) is precipitated immediately, which often can be observed by the appearance of a white veil within the drop. When this drop is acidified the calcite is dissolved and the carbonate ion disappears from the solution as CO2 gas visible as an effervescence while the related calcium ion remains in solution. If the salt solution is separated without acidifying from the precipitate by filtration, the filtrate solution is depleted with regard of the ions that had precipitated with the calcium ion to form calcite.

The analytical results depend on the relative quantities of gypsum and sodium carbonate in the original sample:

1) If the stoichiometrical amounts of gypsum and sodium carbonate are exactly the same (a most unlikely case) the filtered solution will be neutral (pH = 7) and contain Na+ and SO42-. In the acidified solution only Na+-, SO42-- and Ca2+ ions will be found.

2) If more gypsum than sodium carbonate is present, the filtrate will contain Na+, SO42- and Ca2+ with a neutral pH. In the acidified solution, besides Na+ and SO42-, somewhat more Ca2+ will be present than in the filtered solution.

3) If less gypsum is present than sodium carbonate the filtrate contains not only Na+ and SO42-but also CO32- ions, and therefore the pH of the solution is alkaline: The acidified drop contains Na+, SO42- and Ca2+.

It is important to be aware of the possible reactions to avoid misinterpretation of the results. In these cases a careful mineralogical investigation helps to observe the salt minerals that are really present on the building. The described precipitation reactions can also take place within the building materials if the diverse salts are dissolved together. Therefore it is possible that the efflorescing salts on a given object may differ at different times.

If the presence of salts is presumed within stone or mortar, the micro-chemical tests can be performed on concentrated water extractions of these mixed materials. In this case, no analysis of salt minerals is possible and only the water extractable ions are detected.

Within the material these ions are present as ions in the pore solution or they are crystallized in the pore space. If the sample contains salt mixtures precipitations of insoluble phases, such as calcite, occurring during dissolution, these cannot be detected because they cannot be extracted by water or distinguished from the same compound that may be present in the stone or mortar powder.

The problems arising during the analysis of such samples will be discussed considering samples containing sodium carbonate and gypsum.

During dissolution calcite is precipitated from the sample. As nearly all mortars and many building stones contain calcite this precipitate cannot be distinguished from the calcite already present in the material. In relation to the relative quantities of gypsum and sodium carbonate the analytical result will be as follows:

The described problems can also occur when analyzing salts by means of water extractions of drill cores or other salt containing materials. As shown above, the results can be distorted.